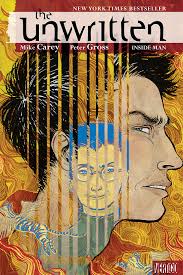 I thought I'd have some time to plow through a bunch of books but I haven't been feeling super well as of late. Additionally, I downloaded a new ap for my phone that gives me access to all kinds of out of print manga so I've been super enjoying that. A lot of things that aren't available at my local libraries.

I'm not sure what I think about The Unwritten. I was really loving the first quarter. Then the bits in between were a little convoluted and confusing. Then I really loved the last story arc all about the man stuck in a Winnie The Pooh type story as a little rabbit named Mr. Bun. That was hysterical. Children's stories full of words like "cunt" and "fucker", I couldn't help but laugh, especially with the adorable illustrations.

A lot of this book appears to be about Tom Taylor's attempt to find himself, or rather the truth about himself that seems to be kept from him. I'm sensing that he is in fact a construct of his fathers imagination that has become corporeal and run rampant all over reality. But I don't know at all. It's speculation. I don't feel like I have much in common with characters who are trying to discover themselves. I find it difficult to relate to.  I always feel like I've had a firm grasp on my identity and I've always accepted the fact that people change and I as a result will continue to change as well. This doesn't bother me. People seem to have this sense that their identity is something them locked in this state of consistency - which is all well and good but damn, ya just gotta grow. If you take a look at Tom at the beginning of volume 1, you get the sense that this is an unhappy person who doesn't know who he is - and that's before the walls of reality start crashing around him (before fantasy becomes reality). The fact that all these fantastical things start happening to Tom, and his first instinct is to reject it (this identity, that is supposedly his true identity) is something I don't really relate to.

Tom can't seem to accept who he is, and rejects all this change. Yup... nope... I hope there is another character I can get close to. I mean, if I got sucked into an awesome fantastical universe, I'd have so much fun. Tom just makes rash decisions and fails rejects it. LAME.

BTW School starts for me September 4th! I'll do my best to keep up with my blog, gym, work and school. Watch me go - RoboFroggie!