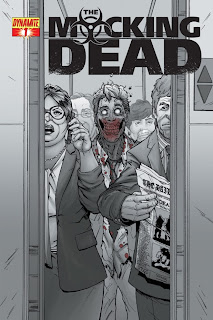 Obviously I had to read this little piece of geekological goodness. Credits to The Mocking Dead lists that the comic was "prepared by" Marvel Zombies' Frederick Van Lente. This little comedic gem is meant as a spoof on The Walking Dead as well as many other horror movies/comics. It consists of some awesome zombie pop culture references as well as some great geek god references. (Yes, I believe in the geek gods)

The plot centers around self-proclaimed "pop-pirate" Arron who once worked for a government organization centered around developing contingency plans for Tinseltown's fictional  and prolific catastrophes, you know, in case they happen. Like the zombie apocalypse, Dracula, Frankenstein, etc. In this case, Arron is brought in as a consultant for a secret government operation who are waging war against The Mocking Dead. In this book, the dead laugh at you before the eat you (and maybe while they are in mid-consumption....and probably after too).

The Mocking Dead is put out by Dynamite Comics, a label I'm familiar with but not intimately familiar. In other words, I haven't read an entire series from the label, all the way through. I didn't get all up in its pulpy, inky center and dissect it. I'll get there, hold on. I also want to add that I am enjoying the gray scale in the book. The pop of red blood here and there is great, totally reminds me of Sin City, well maybe cause I just finished reading some Sin City.

As for The Mocking Dead, I'll be reading issue #2. It's funny, it's nerdy, and it grab me by..not by the balls silly, girls don't have those.
Posted by The Frog Queen at 4:43 AM