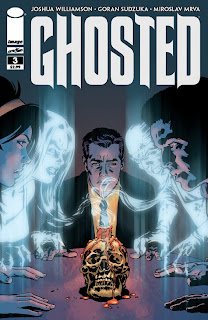 As I began to read Ghosted, I started to wonder if this story was supposed to be kind of ridiculous. How serious was this comic taking itself and now that I've finished the issue, I think it's safe to say that the writer thinks he's funny but I do not. I was however pretty pleased that after a two bubble blurb of none-sense from a shaman, one of the characters read my mind and stated "This is stupid". I agree.

The plot involves several people trying to capture a ghost and not one specific ghost, but just one of the ones that haunt the mansion they are in.

I liked about half the story art. The only thing I really took issue with was how the "ghosts" were portrayed. In comics, things are scarier when they aren't all up in your face (unless of course your Junji Ito) but I'm not entirely sure if this is supposed to be scary, because it's not. Yet I'm not laughing either. It's too bad really because the cover is fabulous. I think Sudzuka has some real talent. I mean he worked on Hellblazer, one of my favorite series of all-time (Hellblazer: Lady Constantine). So far though, writer Williamson has left a lot to be desired.