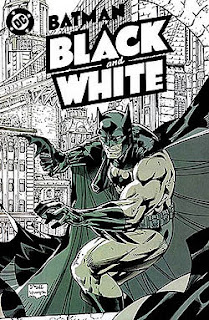 I don't tend to get into Batman too much. Not that I haven't read a lot of it, don't get me wrong but it takes specific authors to grab my attention. If Sam Kieth is doing Batman, you can bet I'm going to read it but as far as the New 52 is concerned, insert fart noise here.  I have decided to read this in honor of the current running Batman Black and White, which I haven't read but have flipped through. It failed to grasp my interest. So here we go Neil Gaiman and Simon Bisley do Batman right.

I've always been a Neil Gaiman fan and really, who isn't? He has a playful take on Batman that I can appreciate (insert Sam Kieth worship here). Gaiman plays with the reader by letting the characters acknowledge that they are in a comic book. He involves us in the Joker's ridiculous plot to be the only stand-up comedian in town. The Joker lets us know we'll be doomed to hear jokes by the Joker and only the Joker for the rest of our existence. Well, that's if we lived in Gotham. Me? I could probably live with that.

I really love black and white comics. Many of my favorite comics are in black and white, I barely care about other colors at all. Bisley is fantastic! I love the shadowy Batman. That's how he should look! All in the shadows! I really like Bisley's Joker which reminds me Mok from Rock and Rule (a character inspired by Kieth Richards). He's given the Joker a real sunken-in heroine addict look. I think it really fits our insane criminal clown here. This is how I like my Batman comics.
Posted by The Frog Queen at 2:29 PM