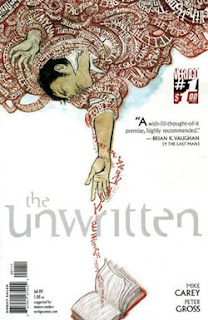 Okay I've got to admit it, the only reason I picked up this series was because I kept seeing all these awesome covers on the shelf. I don't have much to say with regard to the inside art. It's fine, it's just not all that memorable for me. Kinda the same as I feel about the Buffy artwork, "meh". But man, the covers for The Unwritten were just so beautiful. I had to!

So I enjoyed most of the volume until the last chapter which focused on the past. A fictional account about an author who was actually real. It was pretty boring and I have yet to unravel what purpose the chapter served in the overall story. It came off as trivial filler when I read it. Sorry.

The story itself centers around Tom Taylor who is the son of a famous (and disappeared) author. His father published a series of books that are similar to the Harry Potter books. They happen to be centered around his son who he calls Tommy Taylor in the books. Reality starts to shatter for the real Tom Taylor and pieces of the books start seeping into his life. But is it real? or an elaborate ploy?

The Unwritten is produced by the same people who wrote Fables (a series that I have never been able to get into). It's reported on Wikipedia that Mike Carey found the inspiration behind Tom Taylors identity crisis in Christopher Milne who was the inspirations for his fathers books Winnie the Pooh.