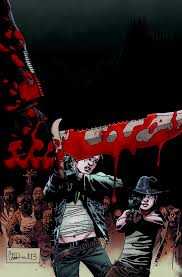 In the past, I've gone on and on about how I think Negan is the best antagonist this book has ever had. In these issues he makes that clear. Not only does he have reasoning (which he explains) behind all his actions, he totally gets you kind of understanding it. All in a very fucked up way of course but seriously, you start to think like Negan. If I was the leader of a bunch of idiots that I controlled only with scare tactics and brute force, well I would justify it in my head the exact same way as Negan justifies his actions verbally to Rick. Of course, I'm neither violent or twisted in that way, but you hear what I'm saying. He's a bad guy that has motive besides wanting to cause chaos.

So Rick's kid Carl has been returned to him, by Negan but dude needs to drop by and collect some stuff now and then. One of the things I don't get, is that while Negan is there, he asks a female if she'll fuck him (Negan despite being inhuman is also big on consent apparently). So Negan has a harem back at his base camp. He gets all the ladies because he is basically agreeing to take care of them in exchange for sex. He calls them girlfriends but come on...

Anyway, I'm wondering if STDs are a thing in this universe now that the population of humanity has downsized to about 1/100th of it's original capacity. Have STDs and STIs been wiped out of existence? What are the chances that some asshole with syphilis has actually survived the zombie apocalypse and if this though occurred to you, would you really want to tempt fate and fuck a person like Negan. I'm also assuming here that condoms are difficult to come by. No new ones are being made, so am I to assume that any female who sleeps with Negan runs the risk of being impregnated by a sociopath? I mean, the breeding pool of humanity is small, so your choices as a woman are pretty limited.. maybe sociopath isn't a big turnoff right now .... I digress. LOL. Obviously I'm over thinking this point because in the apocalypse does one really care if they get an STI? What about AIDS? I mean, it's an awful disease that has been made livable in our generation, but in the zombie apocalypse if you're really intent on living, you can't afford to risk getting HIV!

None of this has to do with the awesome plot that's happening, I realize this. Am I gonna tell you what's happening? No not really. I'll leave you with this : Rick pissed off Negan AGAIN (surprise) and Lucille is about a foot away from Rick's head.