Tank Girl ONE by Hewlett & Martin 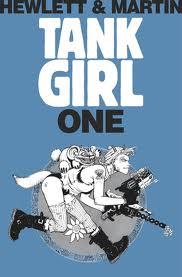 Over the years I've read pieces of Tank Girl. I have never actually read the classic Tank Girl where it all started. So I ordered it from the Library. I gotta say, I appreciate the book but it's not my kind of comic. It feels like a zine more-so than a comic book. It suffers from disorganized plots and absurdity which would attract a lot of peoples attention. For me, it's just not sucking me out my own little world enough. I can't escape when I'm constantly being reminded that I'm the reader. Tank Girl regularly points out that she is in fact, inside a comic. None of this is bad, it's just not for me. I appreciate the artwork which is punk-zine awesome.

Tank Girl is a British comic set in a future Australia. It all feels very distopian. Much of the references made refer to 1980's British pop culture. I find it somewhat funny when a book set in the future refers to the creators present era. For this reason, the book is pretty dated which again, isn't a totally bad thing.

Despite my lack of interest in reading the rest of classic Tank Girl, the series continues on with new writers and artists to this day and last February released a collected works titled "Everybody Love Tank Girl". While I could sit down and appreciate the odd occasional issue, sadly I have to say, I'm not in love. I could never sit there and read issue after issue.
Posted by The Frog Queen at 5:06 AM