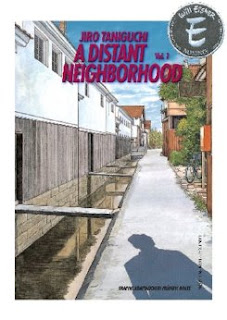 I saw this manga mentioned on a list of  "25 Graphic Novels You Must Read" although I tried to locate that list and can no longer find it online.

A Distant Neighborhood came out in 2009 and received an Eisner Award. There is currently only two volumes and that appears to be where the story ends. The book was so popular that it was adapted into a live action movie and a radio play (I didn't know people still made radio plays, I assume they mean podcast?). The North American printing has been flipped to read from left to right which I don't so much like. I enjoy reading my manga exactly as it was drawn, oh well.

A forty-eight year old man reflects on his past at his mothers grave and is somehow transported back into his 14 year old body in his own past. He gets to relive everything all over again. The question is will he do everything the same? Make new mistakes or decisions and will he ever see his wife and daughters again? Will his own future change?

The entire book is full of clean lines which gives the illusion of minimalism however the over all panels are pretty complex. There's a lot going on to be sure and nothing about the scenery is left to the imagination except for what is outside of the border lol. It feels very professional and very serious. As a result, I didn't find much humor in the story at all. It read like a drama. I would have thought that going back in time would be hilarious. Apparently it's all serious business 'cause Nakahara decides that he must reverse the past- the portion where his dad splits leaving him and his siblings alone with their mother.

The story is somewhat suspenseful, mostly because you want to see what stupid thing Nakahara will do next in his 14 year old body. I have to admit, I'm anxious to see how he will return home. Will Nakahara actually succeed and if you does, will he have to live his entire life over again? Will be be transported somehow back to the future to learn how different it all has become?

I feel like Nakahara could take advantage of his time in the past in a much more productive manner. If I went back in time, I'd have a lot more interesting things to do over again. First of all, considering I already lived to 48, I would go back to my 14 year old self and be the over-bearing, loud mouth I am now. I was pretty reserved and a bit shy as a teenager. Not to mention incredibly awkward and self conscious, but that is probably all teenagers really. I wouldn't know though. Although I was pretty social, I kept any real thoughts to myself so I can't say I learned much from the other kids I hung out with. For the most part, I never felt very connected to the world around me. I rarely understood anything that my friends were talking about and my mind was off in lala land daydreaming. What else would I do? I certainly wouldn't put any more effort than I had into my studies or school. Fuck that. I probably would have left home earlier than 17 and I probably would have told off my dad. Also, I would have skipped the whole Graphic Design course after high school and saved money to go to Europe. I would have dumped my high school boyfriend after the first year we dated and I would have cut off ties with negative people well before my mid twenties. Other than that, there's not much to go back on. I think pretty quick on my feet and that's pretty much why I made the decisions I made the first time around. A lot of uncontrollable and unforeseeable events. But looking back, I think I handled it a lot better than most people would put in my position.  (If I do say so myself)

So what would you do if you could go back in time and change the past?
Posted by The Frog Queen at 5:37 AM