The One Trick Rip-Off + Deep Cuts by Paul Pope 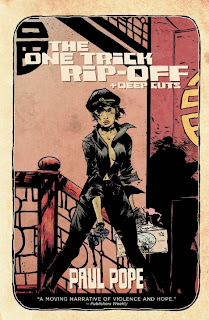 A good friend of mine recently interviewed Paul Pope (and has yet to let me see the outcome I might add) so I decided I had to read some. I only previously had seen some Batman stuff come from Pope. Knowing that he had his own stories printed, I thought it was a good time to look into them. I think this particular book was a good starting point as a crash course on Pope's work. I literally picked this book up after work, read it front to back and decided to write a blog post.

This hardcover book collects The One Trick Rip-Off and a series of short stories under the title Deep Cuts. This collection highlights Pope's artistic flexibility while displaying the distinct story-telling style that I can only express by using his name. Pope's work is a mash-up of violence, drama and romance. Even the stories that don't involve an actual romantic coupling, are told ...well, with the old meaning of romance. Words in cursive and often in verse seem to melt into the artwork, completing the panels.

The first story The One Trick Rip-Off (1995-1996)  had me hooked and I was immediately upset when it was over. I wanted more. Violent grifter/gangsters, head-over heels lovers trying to make a new start away from crime and their pasts. There is some strange sci-fi stuff going on as characters push their wills on one another to achieve their goals. Some supernatural ability that goes unexplained. It reminded me a bit of Push. 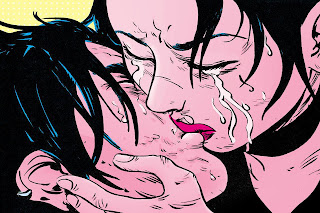 Another favorite was in Deep Cuts -Tokyo (1998). More gangsters! Did I mention that I really like gangster/mob stories? Organized crime.. yeah I kinda have a thing for those types of stories. Of course the other stories aren't all gangster and range from little pieces of lives. One about about Pope himself meeting a man named Yes. One about some troublesome teenage girls. Some of the stories are completely devoid of narration or dialogue and exist as a story in pictures alone. 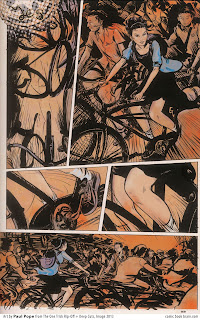 One thing I can definitely say is that I will be reading more from Mr. Paul Pope while bother Matthew about the interview. He really should just post it up here!