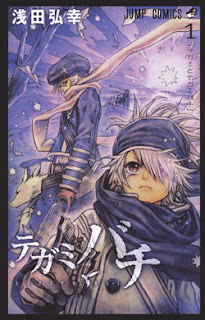 Some distant planet or a future Earth full of mutations and a man-made sun? That is correct. There is a man-made star above the capital city in this wasteland of a planet. All I know is that the area is known as AmberGround. I'm unclear what planet this story takes place on, but I doubt it's all that important. This is definitely a fantasy/sci-fi manga. The artwork is beautiful although I have a hard time believing our introductory lead character and post-man Gauche, is actually 18. He looks 5 despite being tall.

The story starts with Gauche who claims he's a letter carrier which in this society are known as Letter Bee's. Leave it to the Japanese to go silly over a play on Roman characters. The letter carriers in AmberGround carry pieces of peoples hearts to their destination along with the letters or in some cases A SINGAL letter written on a piece of paper. Sometimes they are entrusted with delivering whole people which is what happens to Gauche. He is immediately charged with delivering Lag Seeing (awful name truly) to a distant district which happens to be impoverished. It is through this life changing event that Lag realizes he wants to become a Letter Bee as well. The manga skips to 3 years in the future post child-delivery. I believe that makes Lag 14? He is now enrolled as a Letter Bee in training and still without his Dingo (that being a companion of any species although normally of canine decent). Coincidentally, Lag too is entrusted with the delivery of a human being although she is not all she appears to be.

Letter Bee has been turned into 2 seasons of anime. I won't watch it most likely. Again, I'd rather read than watch. No subtitles don't count. I will most likely order the next volume because it's pretty and the story line isn't that lame. There are giant hollow armored bugs. That's fun. I like crazy monsters. Why? I dunno.. gee do I need to know the answer to everything??

Okay, I don't want to give away the surprise about Lag's human letter. So I won't. Just read it. I actually enjoyed this Shonen Jump manga. It was really cute, pretty and imaginative.
Posted by The Frog Queen at 1:32 PM