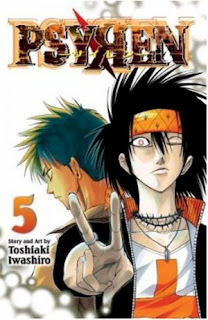 We left our Psyren Wastelanders in the wasteland. They stumbled into a bunker and found a videotape explaining a piece of the puzzle that holds the key to the future. On the video they see the children from Grandma's school, completely destroyed. They were supposed to save the world, but they were murdered by a memeber of W.I.S.E.

My heart wasn't really in Psyren today. I found it quite bland in comparison to the last volume. The best part was the ending. Suddenly we meet a large group of members from W.I.S.E. (That super-human elite group that seems to control the future. We really don't know more than that.) Four characters are briefly introduced at the very end. Like other popular Shonen Jump manga, it appears Psyren is turning into a different sort of book. Kind of like how Bleach turns from one which takes place in present day Japan and then becomes solely a story in the land of the dead (or dead-ish).

I hope things pick up in volume 6. I am interested to see if the new story arc with the members of W.I.S.E. ends up developing characters are who are not wholly evil but identifiable. I'm also interested to see if Iwashiro can grab my attention in the same way he did with volume 1.
Posted by The Frog Queen at 4:55 AM