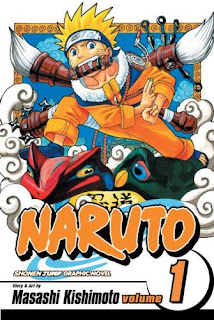 I've seen all of the first Naruto series. Yeah I know I don't watch anime anymore but I use to. I was a huge Naruto fan back when it first aired... I was probably 20? 21? Don't mock me! Animation is a wonderful thing. I just don't tend to watch much anime due to it ruining my favorite manga for the most part. Let's move on.

I love Naruto and as far as I know, the anime followed the manga very closely in story-line aside from a few divergent episodes while trying to draw out the series. FILLER.

Okay for those of you who are unfamiliar, Naruto follows the story of a capricious, young ninja student who has entombed in his body, the demon soul of a nine tail fox. Phew, that was a mouthful! (That's what he said)

Naruto is orphaned, and scorned by his village considering an powerful demon that killed off much of the village, is trapped somewhere inside of his body. It was imprisoned by the mighty Fourth Hokage (the leader of the Hidden Leaf Village). Naruto, is a bit of a troublemaker but full of hope and empathy. His goal beyond helping others which comes naturally, is to one day become the most powerful Shinobe in the village and claim the title Hokage for himself. Well, he's only about 12-13 right now. He's ambitious for certain but contains a great amount of self-assurance and confidence. What a great character for young people! I'm always recommending Naruto to people with children.

I get to hate on Sakura, Naruto's love interest. Sakura wants Saske though. Me? I can't stand Sakura for the most part. She's a pretty terrible and selfish person. There are some great scenes later in the story where she gets served though. Listen to me hating on a 13 year old fictional character. I need more of a life.