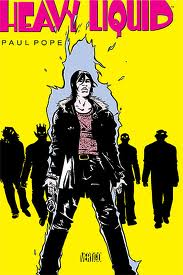 Another one from Paul Pope. Heavy Liquid was a 5 issue limited series that ran on Vertigo from 1999-2000. Cyber punk awesomeness. If I was to die and come back in the future, it better be all cyber punk as hell. I mean, I'm punk as fuck (regardless of holding down a career while being a student. Who says it isn't punk to have ambition).

The story centers around a character known as 'S' who is hired to locate a famous metal caster who has gone into hiding. It just so happens that 'S' was once romantically involved with this famous artist. That's half the fun. His commissioners wish to have the ultimate piece of art created by the artist known as Rodan Esperella. The key is that they want the sculpture created with a specific material known as this Heavy Liquid. A highly corrosive and unstable liquid metal that when cooked the right way, can also be used as an enhancement drug. It's all very mysterious but it gets solved at the very end of the book. 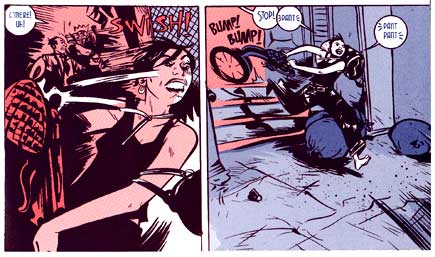 Heavy Liquid is full of all sorts of crazy images as well as some beautiful scenery panels. I've always appreciated artists who take great care and detail in their backgrounds. I also have a great appreciation for  character-less panels. They are designed to suck you right into the story. I wanna be sucked in. Half the time, I don't ever want to come out. I just love escapism, but we all know that. I seem to recall this long conversation I had with someone, sometime ago where I was being criticized for my love of escapism. I suspect I know who was criticizing me for my escapist reading. This coming from someone who smoked up 24/7. Some loser I shacked up with.. like half the losers I've shacked up with. Wait, that sentence isn't accurate- I mean to say 'losers who shacked up with me'. I'm the only one who paid the rent. Anyway, fuck 'em.  Escapism is awesome! As someone who isn't terribly unhappy in general, I still need to escape into an awesome cyber punk fantasy once in a while!

At first I didn't think I was going to like this book as much as I enjoyed 100%. As sometimes happens however, I was wrong. I really enjoyed reading this book and you know what? You will too.