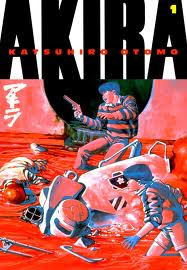 I've been wanting to read Akira since I saw the movie over 15 years ago. Reason I haven't? Cause it's too damn expensive and I'm just a poor tech writer & student. I recently noticed it at the local library and was like "DONE"! So I picked it up and this morning, I simply could not put it down. Now I gotta go grab Volume 2.

For those of you who don't know, Akira is an epic cyber punk manga that was turned into an animated motion picture in the 80's. It has had a special place in my heart since I first saw it as a teenager. It was my first experience with cyber punk, my favorite genre. I never totally understood the movie completely as a lot of the actual plot and background is told in the manga, which I'm only now reading. What I understood were the basics. A biker gang member getting involved accidentally in a government experiment to create psycho-kinetic humans. There was once a giant explosion and a child named Akira is at the root of the cause. As far as I can tell, the child possessed enormous power, cultivated by the government and his power became uncontrollable. Lead character Tetsuo now exhibits the same signs as his power awakens. Volume one merely introduces the situation and shows the first changes in Tetsuo as his childhood friend Kaneda struggles to contain, help or destroy him. 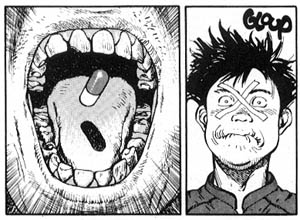 The artwork is outstanding. Neo-Tokyo is a re-built city which Otomo illustrates by showing every crack, flaw and desecration in his panels. It truly is a cyber punk metropolis. I am in love. I think I would thrive in this sort of environment ! Although you know, I am just living in my own little fantasy of who I think I would be in a post-disaster world. Can't wait to read more.
Posted by The Frog Queen at 11:10 AM