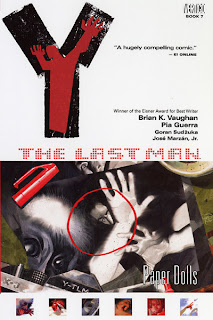 In this volume you get more Agent 355 history! Oh Agent 355, you're so hot. Oh Yorick, you're such an idiot all the time... why didn't you grab the bad journalist before she run outta the hotel? She was smaller than you and unarmed! You needed her information! Way to go moron!

There are major plot spoilers in this... this volume is where we get a teeeney-tiny hint about where this mysterious man-killing plague came from. Perhaps a clue to why Yorick is still alive. It all comes down to the little "&" the monkey. Yeah, I know his name is Ampersand. Apparently he was on his way to Dr. Mann's lab for some kind of testing. On his way, he switched with a normal non-laboratory-test-subject and wound up in Yorick's bedroom as a helper-monkey-trainee. Poor buddy, so that's why he has to wear a diaper.

*Spoiler* There's a truly awesome dream sequence belonging to Ampersand where he is drifting in the ocean on a seagull's nest, finds an egg. Inside the shell is Yorick face filled with tears. It's actually really touching, especially since Dr. Mann had just finished telling Yorick his monkey didn't love him. hehe. It's a good dream and I thought it was a great addition to the volume.
Posted by The Frog Queen at 4:10 PM