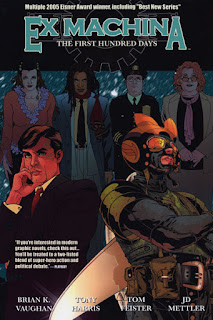 This is volume 1 of the series. I never know whether to include the volume number in the heading, or simply the title of the volume. Additionally, I want to start to include the publisher information in my posts but have not always remembered to do so. I guess I'm too busy trying to organize my thoughts around the story/art.

You will recognize the author of this particular story, he was the writer of the famous Y The Last Man. This story however is such a departure! (Well I should say that Y was a departure from this since Y started in 2008 and Ex Machina started in 2004.) The reader begins following the very odd life of a man named Mitchell Hundred who had been imbued with the power to talk to machines and therefore can tell them what to do. Or maybe he's asking them? That's unclear at this point.  This all happened in 1999 when doing a routine river run, he and his partner noticed something glowing under the Brooklyn Bridge. It just happened to explode at that particular moment. Spring ahead to 2002 where he's the Mayor of New York but before all that, he had a short lived career as a superhero! But like everything Vaughan writes, it's not all so black and white.

The first volume attacks some sexism and racism. Although, I sometimes find Vaughan's use of female characters counter-productive. It's fine to address specific gender inequalities but I wish some of his female characters had more.. character?? So far I really do like Journal. Yeah her name is Journal and she's an Art History Major who's an intern for Mitchel Hundred at the old Mayor's office. She is quickly promoted and handles a nasty debacle involving a particularly problematic piece of art. A picture of Lincoln with the N word written across it, and created by a white chick in her 20's. Well that's all I'm gonna say about the plot. There's a lot more going on, what with our ex Superhero getting use to being Mayor of New York.

As for the artwork. I actually like it although it can tend to feel a bit stale. By stale I actually just mean, sometimes it lacks that ability to see the character's moving. You can't always tell how see their individual mannerisms. This probably sounds stupid to most people but some of my favorite artists are my favorite because of the life their work takes on. It actually feels like the comic is in motion and you can see the character's moving as if they actually are alive. Sam Kieth has this ability. At any rate, they do have those action type panels in Ex Machina, although it's somewhat immobile. God these are the worst words I could possibly use to describe a one dimensional piece of paper. Of course the damn things immobile, but are you catching what I'm throwing?

At the back of the volume, there is a nice "reference to finished product" section with a few different panels in their various stages of becoming complete. It's cute how the artist had taken pics of co-workers and turned those into the panels. I've seen a lot of artists do this sort of thing but I don't come across too many people showcasing it in this way. At least not in the back of the book itself. Most artists are a little ashamed of this sort of reference material... or maybe that's just me?