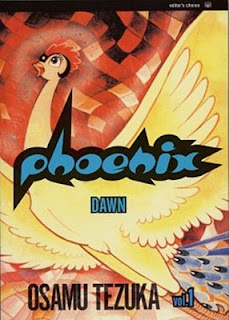 Judging from the cover art, one would figure this book would be a children's manga. It's far too violent for that in my opinion. However, it's not full of blood so I suppose it COULD be suitable for children. The dismembered parts of wounded soldiers are drawn as near cardboard cut-outs, completely devoid of blood or entrails. I suppose that is somewhat disappointing for a gore fan like me, but it did not ruin the experience. Tezuka’s stories are always heart wrenching regardless of the gore. Sometimes I find myself turning away from the brutality. Phoenix has those moments. Dawn happens somewhere near the dawn of time in feudal Japan. Tezuka based his story around early accounts of Japan and Korea. The information is largely myth and speculation which Tezuka explains as the story goes. First, maybe I should back up. Allow me to give you a little background on the Phoenix series:


Osamu Tezuka considered the Phoenix series his life’s work and masterpiece. (Although I could argue that all of his work is masterful, I won’t do it here.) The series spans 12 volumes and each is a story from the past then future, and back and forth through time. I am currently reading volume 2 which takes place in the distant future. Already I have noticed 2 recycled characters which I always like about Tezuka. He has this universe where certain characters walk in and out of one series to another.


Tezuka started the series in the 1960's and left it unfinished when he passed away in 1989. Seeing as how each volume is a separate story, I doubt that I'll find a huge hole when I've reached the twelfth book. Twelve is a great number to leave off on don't you think!? At any rate, there has only been speculation regarding how Tezuka wanted to end the series.


There is plenty of heart ache in Dawn. Men, Women and Children alike all fall victim to various human indecencies. People may wonder why bad things happen to children in these books, well that is because bad things happen to children in real life. I think Tezuka, first and foremost excels at portraying the human condition. Suffering is something he tells well, not to mention the enduring spirit of the person who can move on towards the better even after enduring horrible events.

If I can, at some point in my student life, I want to write a paper on the work of Osamu Tezuka. Think someone will let me??