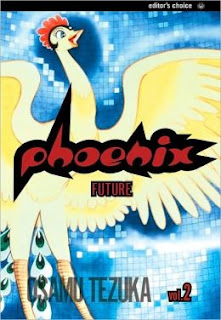 In Future, Osamu Tezuka goes to the most distant future of Earth in his universe. We begin by following a fugitive and former Class II Space Patrolman Masato, as he tries to flee the city of Yamato with his alien shapeshifting girlfriend. Her name is Tamami, and her species is  called, get this: a moopie. Hysterical. In their natural form, Moopies kind of look like Tribels, those fuzzy little disc shaped creatures on the original Star Trek series.


Masato eventually stumbles on Dr. Saruta who has been working on a way to replicate life that may survive on the surface of the earth which is wrought with radiation. He is a hermit who dwells in a dome structure on the surface of the Earth, a feat which was not very common since all of humanity had retreated underground centuries ago.
It was the Phoenix that led Masato and his moopie gal to the dome.The Phoenix gives Masato his quest: rebuild humanity in the wake of nuclear war. Masato is granted immortality. It's a curse rather than the blessing it is perceived as in the preceding book. The book becomes almost existential at that point.

There are a lot of things about the story that I really enjoy. Tezuka pokes fun at a future in a rush, not unlike the 21st Century. People start dressing practically in costume, rather than fashion. Nostalgia. Also I love the idea of cities being controlled by super computer who's ideas defy one another.  Another little point: You'll recognize Roc. He's a character in Tezuka's Metropolis.

So much I love about this so far, but sadly I can't get my hands on a copy of volume 3. It's all sold out on indigo and well, Amazon doesn't do the whole debit online thing. The library doesn't carry anything past volume 2. Sigh. God knows how long before I can get my hands on the next volume.