Eden: It's an Endless World! Volume 5 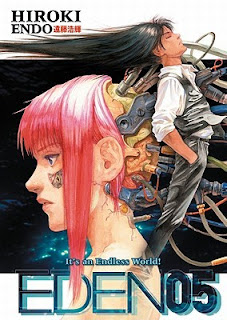 Eden is such a brutal book. I say this as I'm simultaneously reading Berserk, yet Eden is a very touching story. The characters have such tortured pasts. In Volume 5 we finally get to learn more about Sophia, otherwise referred to by me as 'cyborg lady'. Sophia apparently was a mathematical & physics genius. However, she suffered from severe emotional problems due to being a poor little rich girl who's parent's didn't love her. She became a fairly horrible person until she purchased a brand new cyborg body. In the time it took to adjust to all her new sense, she found an appreciation for life she did not originally have. Before the operation, she had tried multiple times to end her own life, had countless abortions and a few children which she abandoned. Apparently that was all in her teen years! Her past is pretty despicable. There is one child she did raise. That was Kyle who we met back in book 2. He was the dead child that Elijah buried.

In this volume, we also get to meet a new character. Maya, is the name but it's actually a male character. Maya apparently means illusion. I don't want to spoil it all so I'll leave you with that little info only.

A little side note - Don't read the Afterword from the author if your in a good mood and don't want to be depressed. Just skip those.
Posted by The Frog Queen at 9:25 AM