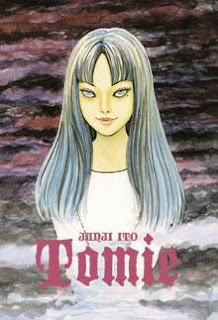 This is one of Junji Ito's earlier stories, 1987 to be exact. Immediately, I could notice an un-polished look to the illustrations utilizing far less detail than his more recent work. Tomie is a 12 Chapter manga and right up my alley of course.
The story begins with the death of a classmate Tomie, told by a young girl claiming to be her best friend. Tomie is torn apart, completely butchered. The shock comes when Tomie walks into class unharmed and completely healthy. Her classmates are in disbelief and her teacher insists she must be a twin! Unfortunately for everyone, the body parts of the butchered girl believed to have been Tomie, are cremated before there is time to go back and re-identify the body. Yet, they all remember the reports that the dental records matched Tomie's 100% !!
Everyone gets over the tragedy, happy to have their pretty classmate back but something's not right. Tomie starts leaping to her death over and over again as she drives men to madness by inspiring lust. Tomie is incapable of dying even after her body is dismembered by her teacher and classmates. Each chapter is a new story of Tomie's demise. Kinda like Groundhog Day.
I read this online-yeah I know bad me, but it's soo hard to get Junji Ito's older books. Darkhorse released "Tomie" in 2005 but every time I try to order it through Indigo or my local comic shops, it's on backorder. Indigo claims that the book is sold out...it's been saying that for a while, leading me to believe that it is out of print.
"Tomie" has been turned into nine films which were initially released in 1999. I really want to try and get my hands on the subtitled versions!
Posted by The Frog Queen at 4:53 PM