"OnePunch-Man" story by ONE art by Yusuke Murata 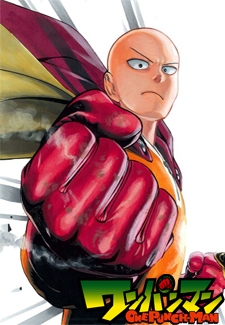 If you ask Wikipedia about OnePunch-Man, you won't find much. There's a tiny blurb about the artist Yusuke Murata but it mentions that he is only collaborating on a project of the same title with web author ONE. Yusuke Murata is responsible for illustrating "Eyeshield 21" which is a manga about an american football team. I have never read Eyeshield 21 but I've heard good things. I decided to check out the first issue of OnePunch-Man after scanning a thread on reddit. It was widely praised.
I don't care for this antenna-headed character in the beginning... too.. DragonBall for me. The art style is kinda odd... I don't totally know what to make of it yet. This is definitely supposed to be a comedy right?? It has the distinct "monster of the week feeling", or in this case "monster of the 17 pages that make up one chapter".
I read the first few chapters online. As far as I know this manga is not available in North America. It looks as thought it's barely been out for a year with only 21 chapters. I suppose I'm reading a fan translation in that case. I suppose it's not that bad but I can't help but think I'm missing some meaning in there somewhere... from what I gather the story consists of a young man who can defeat any foe with one punch. This whole one-punch-win deal is getting him real down because he can't enjoy a good fight if all his opponents fail to survive the first strike. The monsters and side-characters look ridiculous but it seems to be all in jest. The second Chapter is a flashback where the OnePunch-Man is job hunting and runs into a giant crab-like humanoid. (it explains he ate so many crabs that he morphed into a crab monster) The crab-man is on his way to find a creepy looking child who drew nipples on his armour/chest while he slept on a park bench. Crab wants to SMASH! So OnePunch-Man gets to the ugly kid first and decides he should save him since we're living in the age of declining birth rates. OnePunch-Man pulls out one of the crabs giant eyes and well, he's down. They flashback to the present with an unsatisfied hero who trained so hard that he lost all his hair. A cute way to end chapter 2.
I think I will continue reading this manga... and I think I will keep you all updated.
--
Posted by The Frog Queen at 4:51 PM