"House of Puppets" by Junji Ito 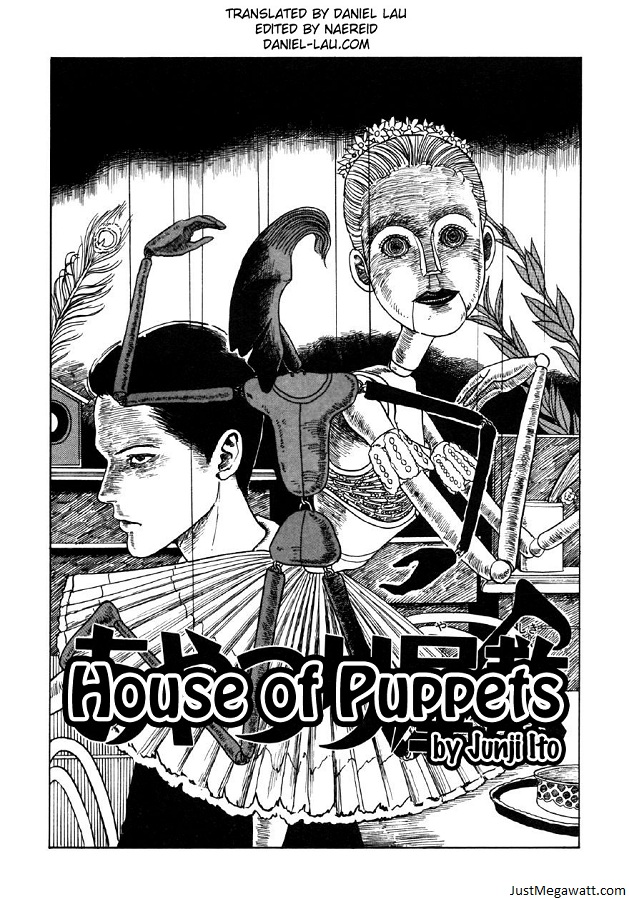 Nice cover page. Jesus that's terrifying. There is little that I find scarier than clowns and puppets. In fact, if you call them poppets, I'll instantly wet myself out of fear.. nah, I'm just joking..no I'm not.
A travelling puppeteer carts his three children around forcing them to help earn their keep with puppet shows. The kids do get some education apparently. Apparently in Japan, it's fine to plow through schools, spending a month at a time at each one. How's a kid suppose to make any friends? Well the youngest of the three certainly isn't going to have an easier time considering they live in a truck.
Haruhiko, the youngest boy brings a friend home anyway, home to his truck and let's her see all the puppets which this little girl thinks are pretty neat. Obviously she's never been homeless before...lucky little bitch lol. She notices this creep puppet which Haruhiko explains happens to be a drench magician named Jean-Pierre. That made me laugh.. a lot.
As you can probably guess, the boys begin to suspect that the puppets are controlling the puppeteers  The eldest son runs away. Their father becomes ill and the children wonder if their nomadic lifestyle will finally come to an end.
In some years later, Haruhiko receives an invitation to meet up with his long lost eldest brother who is now rich and married with children. To Haruhiko's great horror, he finds that his brother has become a living puppet and for whatever reason this all seems very normal to everyone else. This is where things get interesting..but you'll have to read it to find out. It's 60 pages long so it's not terribly long and not terribly short. I find a lot of Ito's stories are really quite short. Anyway, it's a pretty quick read. Unfortunately, no real body gore, but puppets still freak me out... so do French magicians.
Posted by The Frog Queen at 6:17 AM