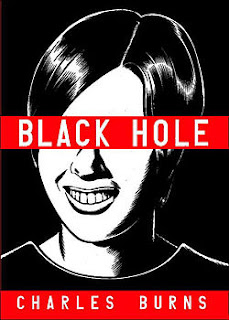 I don't think Charles Burns cares much for women. At least, that is the first impression I got while reading Black Hole. I've read some of his shorter comics in the past and while I didn't find them particularly misogynistic at the time, I'm sure that if I went back to read them, I would have some qualms.
In this large graphic novel, there is a) a lot of drug use and b) a lot of orifices opening up in weird places on the characters' bodies. They are all shaped like vaginas.
The female characters in the book all suffer from near crippling fears of inadequacy and poor self-worth. Burns portrays the women as people who use sex to get closer to the others, which I think says more about Burns than it does about women in general. (yes I'm sure not everyone shares this opinion but this is MY blog) I really felt as though the female characters were all weak and empty vessels. It made me pretty sad actually. The females are all pretty much miserable and full of worry. They cling to men to make them feel safe or "happy" AND one of them has a tale... which says all kinds of things about Burns. The girl with the tale is the one personality that I felt endeared too. She felt like a whole character which apparently Charles Burns doesn't think exists as a real woman so he gave her a tale?? It's as if he thinks a perfect woman is a different species or something. YUCK.
I take issue with the portrayal of drug use in books and film because generally it glorifies drug use which I do not like at all. The drug use in Black Hole doesn't feel particularly glorified. Instead, the drugs seem to deeply effect the way the characters view the world even long after the effects have worn off (which doesn't really fit with my own experiences). The book doesn't seem to really accurately portray the experience of marijuana. It's kind of strange actually..but maybe that it just doesn't fit my experiences. They are teenagers, they are experimenting.. that type of story.

So why is called Black Hole? I dunno, because the characters are all miserable and sinking into the black hole of life? Life is just a big black hole? Or um... the black hole is the awful town they live in? Or is it the woods? FUCK I dunno, I'd have to read it again and I really don't want to do that because I didn't particularly enjoy the book. SIGH... I guess I didn't take too much away from it.