Addicted to Curry by Kazuki Funatsu 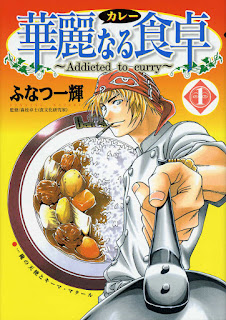 Forty-six volumes of "Addicted to Curry" has been released in Japan since it's debut in Shueisha's "Weekly Young Jump" in 2001. That's a lot of manga. I guess this speaks to it's popularity? At any rate, I decided that I would have to take a look at it since I found out that each chapter ends with a unique curry recipe and I love my curry.
The story starts out following a young girl name Yui, who is in the habit of bringing home strays. This stray however, is a passed out, full grown man. She decided to give him some food but accidentally drops a can of pop on his nose breaking it! She simply runs away too scared to wait for any possible reaction. It just so happens that this man is looking for a friend he met in India who is the proprietor of a curry shop in Tokyo. Coincidentally, the owner of the shop happens to be Yui's father. When Mikato walks into the shop, Yui thinks it's to seek vengeance over his busted nose. Well you can guess what happens.. love. Mikato soon finds out that his friend is absent and that the curry house is going under! The story becomes a great attempt to save the curry house.
Hidden within the story are little bits of information on topics from the history of curry and the relevant spices to culinary tips.
As for the art, it's a bit busy but I enjoy it. It reminds me of the look of characters in Bleach. Actually the Mikato looks exactly like Ichigo to me...except more like skinny teenager Ichigo, not the bulky slayer Ichigo.
Chapter 1 has 40 pages and one recipe for Ground Beef Curry... I think I'll skip that recipe...
Posted by The Frog Queen at 1:32 PM