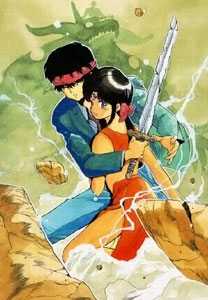 I've known about this manga for over ten years and have never read it. Until my recent realization that the local libraries carry manga, I didn't have much exposure to manga that wasn't carried in the bookstores.
3x3 Eyes is a story following the journey of a young adult male and an immortal being known as the triclops (named Pai) who quests desperately to become human. Technically, I believe Pai is a demon. A few characters call her that on occassion. Pai left Tibet to chase down the son of a man who originally was helping her become human. That son is Yakumo and through his brash actions he almost gets himself killed! Pai casts some magical shimmysham and BLAMO! Yakumo is immortal for as long as Pai is. When she reaches her goal and achieves mortality, Yakumo's human form will be restored.
I dunno if this was translated correctly. As with a lot of manga, some meaning gets lost in the translation. There are a certain amount of cultural idioms that are often left out and replaced due to the fact that it's new intended audience will not be able to understand it. I really like literal translations of idioms. It really helped me learn a lot more about the intricacies of Japanese when I first started reading manga years ago. I use to pick up fan-subed anime off ebay and almost always, the translation was completely literal. I learned a lot but then you get manga that lacks that... and it leaves you feeling like you've completely missed out the authors intended story. I think I'd be very upset if my story was tweaked in translation. Anyway, suppose it's nothing I have to worry about, I'd be lucky to publish in one language let alone several.
Posted by The Frog Queen at 1:14 PM