"Town Without Streets" by Junji Ito 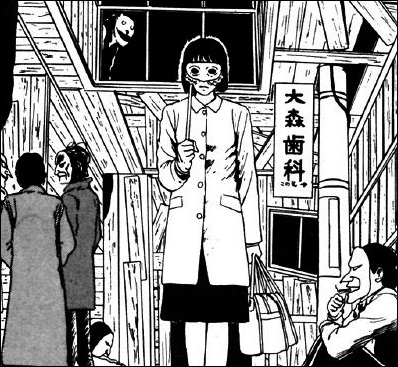 This is a longer manga. The story starts off following a particular paranoid girl named Saiko who at first comments on some odd dreams she is having about a classmate. He was whispering in her ear at night to trick her into falling in lover with him. He ends up dead however! The girl then believes her family is peeping on her (peep holes all through her walls) and attempts to run away from home to stay with an Aunt at a neighbouring town. Before she leaves for her Aunt's home, she is booted from several friends' homes because they hated the lack of privacy due to their imposing friend. On her journey to the town she find that the buses no longer run there. She arrives at the town via a kindly and suspicious taxi driver only to find that the entrance to the town is sadly blocked by a bizarre series of homes. A pedestrian wearing a mask takes her through the building and explains that the building mysteriously began to appear last February and were popping up over night, built right over the streets and connecting all the homes together. The in-between buildings become the homes of mysterious squatters all wearing bizzarre masks of various taughnting expressions. Chaos reigns as strangers must pass through the homes of other strangers so they can travel through-out the town. It is explained that the people wear masks in an attempt to preserve some privacy while travelling through the homes of others.
As some of the original habitants of the city attempt to lock themselves into their homes, they cause a blockade that is met with violence. Violators of the unspoken passers-by laws are bound and imprisoned. The girl attempts to help people as she travels through the odd buildings. Saiko is warned that "The Strange Ones" inhabit the area of town her aunt lives in and they urge her to wear a mask and be careful. The Strange Ones were said not to look human and had cause much crime and stabbings.
Finally, arriving at her Aunt's house she is thrilled to find her home until of course she sees her. The Aunt stands in the doorway in her underwear with near jovial senility. She explains her appearance is the reaction to the lack of privacy in the town. Peep holes all through her home and that she went nearly mad trying to conceal herself. She shed everything, even her clothes and came to conclusion that she felt better without trying to hide. She was "shedding her skin". I won't give away the ending cause it's pretty great.
It's these stories of paranoia and madness that Junji writes that make me feel as though I'm watching a Roman Polanski flick. He did a series of movies now better known as "the apartment films" (Rosemarry's Baby, The Tennant & Repulsion) I've always loved those movies which are very much about  paranoia, and loss of privacy. In each of the films, the main characters become obsessed with the idea that their privacy and anonymity is being infringed on by their neighbours. They really are amazing films and incredibly creepy.  After reading this 70 page manga, I kept feeling like I was watching The Tennant. If you haven't seen any of Roman Polanski's films, watch them! His older films have English subtitles. DON'T GET THE DUB!
Posted by The Frog Queen at 1:16 PM