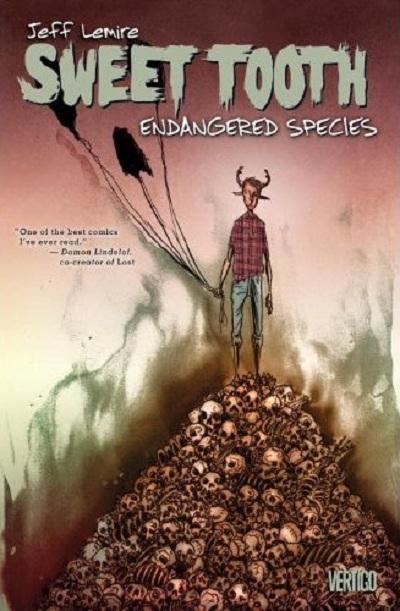 Well this volume breaks the rule of "Show, don't tell" in comics.. Similar to how Woody Allen breaks the rule in film. 'Voice overs bad'. Well it's sort of a rule in comics as well... minimal narration. The first issue of the fourth story arc, is narrated like a children's picture book. It's not bad and to a certain extent I appreciate anyone who breaks things... THROW THAT GLASS! But honestly, I find it mostly annoying when people do this in graphic novels. As someone who read a lot of novels... I like my graphic novels to be mainly composed of dialogue. Neil Gaiman likes narration, but he keeps it to a lovely subtlety. Mostly, narration is reserved to flash-back panels.

I like how the art style changes in the flash-back panels. They were drawn by guest artists Nate Powell, Emi Lenx and Matt Kindt. You can spot one of Lemire's covers across a crowded comic book store (not that its very hard, I mean, comic book stores tend to be pretty small establishments). So it's interesting that there is actually other peoples art work in there...

Let's move on to the story, I really love the story. This volume delves into the reaches of the big picture. One of the doctors from the militia ends up leaving with the rag-tag group of hybrid children and men & women. He reads Gus's fathers "bible" and believe he is now the chosen prophet who must make certain that Gus reaches Alaska. This must be integral as the "bible" suggests that Jeppard is some sort of demon sent to destroy humanity's last hope -Gus. Where the story goes, I can only guess... but it does have some bad decisions made in a post-apocalyptic earth, not unlike The Walking Dead where survival depends on the ability to adapt to ones surroundings and become a nomad.  (this isn't totally true in the latest issues of the walking dead, but I still think they are on a burning path and should leave the stupid commune they've created.. this is an entirely different post) So in the end, a decision is made, to stay or leave a supposed, safe location.

I am really excited to read Volume 5. End and point... was there a point to this? No I'm just throwing my thoughts around :) As usual.
Posted by The Frog Queen at 9:39 AM